You are here： Home » News 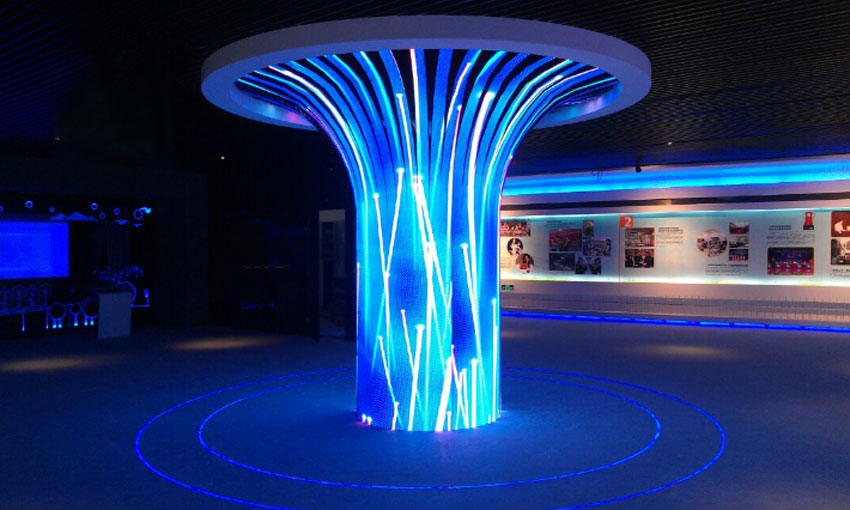 The birth of the creative LED display is a wonderful embodiment of the deep exploration of the city. In recent years, LED rotating screen, LED film screen, LED floor tile screen, LED ring screen, LED wormhole screen... It seems that in this field, only your thinking can reach the depth, but not the breadth of their flexible tentacles. .

1. The field of stage art is the main field of LED display, and the sense of presence has increased sharply: At present, the tide of the LED creative display industry has already swept the world, and with various theatrical performances, commercial displays and leisure and entertainment fields, the dynamic stage beauty effect The ultimate pursuit of creative display has increasingly become a hot spot in the field of large-screen display and the focus of competition among screen companies. In addition, the LED creative display adds the wings of infinite creativity to the promising stage performance, making the scene create a variety of colorful and beautiful visual feasts. The vigorous development of this field seems to be the closest link between the LED display industry and the development of the times and urban development. Whether it is a new breakthrough in shape or a subversive improvement in technology, it is the innovation and change of LED display "uneasy about the status quo". It seems that we can find the figure about the LED display from the hot words in recent years and the popular elements of the times.

The LED stage rental screen is developed with the help of the splicing, disassembly and assembly characteristics of the LED display screen. It has always been known as the "model worker" of the LED display screen. The LED stage rental screen module is characterized by easy "disassembly" and can be assembled and combined into Various styles of display. And customization requirements are high, often in the background of the stage, party and other backgrounds with other effects of the stage to present a shocking audio-visual experience. As a powerful device for shaping the atmosphere of the current stage, the cultural, entertainment and sports industries are developing rapidly. In recent years, the rental screen market has developed rapidly, but the market performance is chaotic and the product quality is lacking. But in general, influenced by the development of the cultural, sports and entertainment industry, the future development of the LED stage rental screen market will shine brightly, and with the continuous extension of small-pitch LED displays, higher-end LED rental screens will be able to meet more Gauguin's perfect stage atmosphere is presented.

2. The creative LED display is responsible for the appearance, and the glass curtain wall leads the new image of the outdoor media market: In recent years, major cities have rectified the appearance of the city on a large scale, aiming to standardize the new image of the outdoor media market, and make unremitting efforts to create a new city appearance and city appearance work hard. For the carrier of outdoor media field, LED glass curtain wall has always attracted extensive attention in the field of outdoor display. The rise of this field is good news for LED large-screen displays. With the improvement of LED display packaging technology year by year and the continuous breakthrough of LED display dot pitch technology, the LED glass curtain wall display, which has emerged as a new force in the outdoor media market, will appear more and more frequently in our field of vision. What's more worth mentioning is that LED glass curtain wall has gradually replaced the traditional advertising information to present a single billboard, light box, etc., and has become a popular outdoor advertising media. A striking new force.

The products of LED glass curtain wall show a clear trend of spreading from first-tier cities to second- and third-tier cities. And it is widely used in prosperous streets, stations, shopping malls, landmark buildings, activity centers and other city conspicuous and landmark locations. It is worth noting that in the past two years, the LED small-pitch market has shown a booming scene, and its outdoor application trend is obvious. Combined, it constitutes a smart street light system, which has become the focus of media attention in the construction of smart cities. It can be seen that, with the help of the construction of the intelligent transportation system, we will see more and more light pole screens that release information such as advertisements, major emergencies, and travel weather. While the light pole screen brings great convenience to urban residents, it will also cause a new revolution in outdoor media.

Bescan is a manufacturer who is specialized in the development, solution, production and marketing of high quality LED Display